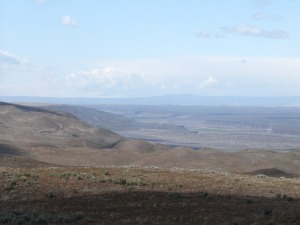 Smyrna Canyon from the old shoreline on Saddle Mountain

Imagine, if you will (to paraphrase Rod Serling), standing on the peak of this range one day nearly twelve thousand years ago. Below, you look out over a grassy plain with a gentle creek flowing between ancient canyon walls. The events that are about to take place have occurred repeatedly dozens of times, but for you, those canyons hold no evidence of the disaster that is about to strike. On this day, the sun feels pleasantly warm. You have left the other members of your band camped on the edge of the creek while you climb the peaks looking for small prey.

You begin to notice a steady rumbling sound, something that began almost imperceptibly, but that persists and even grows. Wondering what it is, you look to the northeast. There is a strange haze in the distance. Perhaps it is something to do with the tremendous fields of ice that rim that edge of your world. But as you watch it seems to grow, to convulse as it consumes the horizon.

Then the earth begins to quiver. A blast of air strikes you, driving dust that blinds you as you struggle to watch. The shuddering intensifies, and you fall to the ground in fear. A rumble fills your ears, growing into a roar as you clap your hands over them to quell the pain of the noise. In a few moments your view of the peaceful waterways to the north are effaced by a cloud of dust kicked up by the sudden ferocious wind. You cover your ears to protect them from the roar, but the sound is nearly unbearable.

It is the sound of disaster: the crash of sudden rivers striking against the mountain you are clinging to. Beneath you, nothing but murk. The sky itself has turned brown with clouds of dust driven by the wind that precedes the flood. It is a flood unlike anything you could ever have imagined. It makes the very earth vibrate beneath you, as violent winds shriek over your back. Your mind can no longer process what is happening. It just feels like the end of the world. For an instant you fear for the people you have left in camp below, but then you realize: they no longer exist.

As the crashing and trembling continue, you struggle to your feet, the wind scouring your skin with pebbles and sand. You strain to look northwards, but all vision is only dust and cloud. In the depths of the maelstrom you think you glimpse impossible waves, tumbling waters that tell you an ocean has come to this inland peak. Contained in the torrent are entire trees, the mangled bodies of beasts: bison, mastodon, severed into bloody bits. You know that the people you love are no different from these by now. Huge cakes of ice are thrown clear of the flood, clustering against the northern slopes of the ridge you occupy. The waters churn beneath you for hours.

Then you feel the earth shudder and slump. It knocks you off your feet again. Suddenly a crevice appears a few yards away. The earth splits and the smooth mountainside plunges into the rushing flood below you, leaving you teetering at the brink of death. Your fear drives you to earth, but you feel the convulsion as the mountain submits to the thundering waters: immense sections of the hillside falter, then dive into the torrent beneath you. You know that you will die soon.

Hours have passed. Perhaps days. All sense of time has abandoned you on that peak, where violent waves now rush past on both sides. But by degrees the sun is breaking through clouds of dust and water. You struggle to your feet. Beneath you, a river of mud continues to batter the mountain. The slope you climbed to the top is gone. All is destroyed: there are yawning cavities lined with rock pillars and boulders. Heaps of boulders glisten in the weak sunlight. You are assailed by the stench of mud, of blood, of water and earth. A current flows beneath you, broken by a standing wall of dancing foam where one vast river flowing from the northeast diverges into two. One flows westward and mixes into a gigantic muddy lake that never existed before today.The other veers off the hill, turning to the southeast where it joins with countless new rivers, all flowing from the distant northeast. South of your mountain, brown waters creep closer in an impossible lake that completely covered what was once a verdant plain. Somewhere to the east the streams are flowing into this southern lake. You know, too, that the new lake below you must be draining through the river gap far to the west of where you stand.

Your world has permanently changed. Your senses rebel at what they see and hear. You are trapped on a thin island of earth and rock ringed by violent torrents and mysterious rising lakes. You struggle westward, towards higher ground, and you see that in the distance the entire mountain has collapsed into the flood. Cliffs a hundred feet high block your way. You can go no further. You shrug to the earth, caring no longer, surrendering.

Melodramatic as all this seems, it is a pale reproduction of what probably actually happened. While there may have been human witnesses to the flood, no evidence of their existence remains. Archaeologists have uncovered artifacts dating to eleven thousand years ago, though, at East Wenatchee. The geological scars from the Ice Age flood would have been fresh when those Clovis points were buried.

It’s Spring Break for Bellingham schools, and I decided it might be the right time to take my son on a trip into the past. Bad mistake. We left home on the morning of my wife’s birthday, an error I may never live down.

The trip we took has family history at the core, and it connects firmly to the geological history of Washington State. This is a story that seems neglected by scientists that delve into the events that ended the Ice Age in Eastern Washington, but it is one more dramatic piece of evidence left by the gigantic flood that carved out the Eastern Washington landscape.

When you drive along Highway 26 in Washington State, you skirt the edges of Saddle Mountain. It appears to be an insignificant range, with little to attract your attention. But that’s because you have to get closer. The gap that gave the range its name looks tiny from the highway, but the cliffs rimming this defile are a hundred feet tall. These mountains contain much that deserves attention, both in grand scale and minute detail. You just have to know what you’re looking at. You need to be able to recognize the abrupt changes that occur in the face of the range as you travel the thirty or so miles from Vantage towards the crossing of Lower Crab Creek.

What’s most incredible about the face of this mountain range is that it probably took on its present look in the space of one or two days, some ten to twelve thousand years ago.

My next entry will explore the geological features created in the flood and landslide on the northern slopes of Saddle Mountain.

One response to “The Five Mile Slide”