Legends of the Ice Cave 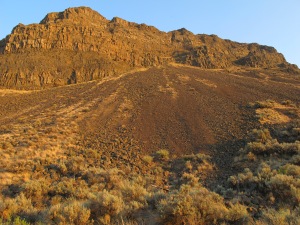 Beneath this towering cliff and rubble fallen from it lie the remains of the Saddle Mountain Ice Cave.

There has been a fair amount of mystery concerning the Saddle Mountain Ice Cave. Even today you’ll find inquiries about it on internet chat sites. Over the years, locals disagreed on lots of points concerning this phenomenon. Some said it was a natural cavern, a huge chamber full of glittering perpetual ice. Others said it wasn’t really anything more than a big root cellar where people kept chunks of ice they would cut out of Crab Creek in the wintertime. Some people even doubt its existence. But it’s there.

Virtually all that’s left of the Ice Cave is a pile of old timbers and the remains of the massive wooden doorframe.

The Ice Cave is about four miles west of the end of the paving on the old Corfu Highway after you leave Smyrna, around eight miles from Beverly. It’s difficult to spot the remains from the roadway, so look for a large alkali clearing in front of it and a huge slope of tumbled rock flanking its other three sides. If you go looking for it, watch out for snakes and ticks, and once you arrive you might just wonder what the big deal is all about. You’ll find a few old timbers sticking out of the rockslide and the upper part of a massive wooden doorframe. Nothing is left of what was on the other side of that doorway, except lots of fallen rock. 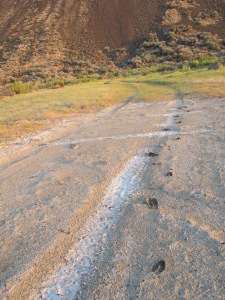 The last traveler on the old tire ruts leading to the Ice Cave was a deer.

The legends surrounding the Ice Cave are what make it interesting for local history buffs. For some of us, it’s the mystery of why there is ice at the foot of Saddle Mountain even in the midst of the hottest part of summer.

My father used to wonder whether the ice in the Ice Cave might not have been part of a buried Ice Age iceberg, rafted to the Lower Crab Creek by the Missoula Floods and trapped by the collapse of a section of the north side of Saddle Mountain. He thought that might explain why you could find ice inside the cave even in the midst of summer.

In his tour guide, On the Trail of the Ice Age Floods, geologist Bruce Bjornstad estimates that the Ice Age floods only reached about half the height of Saddle Mountain at this part, but the powerful flow probably undercut the ridge, leading to landslides that reached all the way to the summit. Near Beverly, Saddle Mountain looms around 1,200 feet over the plains of Crab Creek. The water backed up north of Sentinel Gap, creating a temporary lake as the immense flood squeezed through the narrow channel through the mountain. A  number of large glacial erratics north of the gap most likely fell from icebergs. Perhaps my father’s theory isn’t so far-fetched. An iceberg floating next to the ridge could have been buried in the sudden collapse of the side of the mountain.

But there are other ways that ice caves can be formed. Cold Traps are caves where freezing winter air settles inside, displacing any warmer air that might have gathered through the course of the year. In the summertime, warm air is unable to displace the freezing air, since warmer air rises to the top of the cave rather than sinking to the bottom. Moisture may accumulate and freeze inside the cave. The Saddle Mountain Ice Cave may have been a good candidate for this type of process, since the mouth of the cave is at the bottom of a north-facing ridge, shielded from direct sunlight and heat by mounds of talus on each side except in the mid-summer. A cool breeze can be detected issuing from the mouth of the Ice Cave.

Because I was never able to go inside the Ice Cave I do not know how deep it went into the mountain. If it sloped downwards, a Cold Trap condition would have been even more likely. Dense molecules of cold air would have settled to the bottom of the corridor, with the coldest (and presumably freezing) air at the very floor of the cave. Over time the reservoir of cold air might have expanded upward, since more cold air poured in every winter and warm air would never be able to displace it.

Whether or not the Ice Cave was an example of a Cold Trap phenomenon, on the hottest days of the year a refreshingly cool breeze issues from the rocks.

The Spokane Daily Chronicle reported on the Ice Cave in 1951. This article claimed that the cave was approximately ten feet by twenty feet in size. The explanation for the existence of the ice was seepage of carbon dioxide gas from cracks in the mountain. The article, published on September 20, 1951, asserted that there was actually more ice in the cave in the summertime than during the winter months. The author wrote that even when the heavy wooden door to the cave was closed a person standing outside would still be able to feel chilly air emanating from the recess.

The Chronicle revisited the cave in another article published June 23, 1971. This article is quite similar to one run by the Tri-City Herald on July 26, 1970. This time the ice is attributed to “a fissure in the mountainside containing lock-in ice from early geologic upheaval days.” Sounds a lot like my dad’s theory! The author credited railroad construction crews working on the Milwaukee Road with the discovery of the cave. Jericho Camp was supposedly established nearby to take advantage of the natural cooling for food preservation. The Herald article mentions that the railroad kitchens used ovens they built out of rock, which were evidently still standing in 1970. The Jericho railroad stop was located farther to the west, but the construction camp must have been located at the site of the cave. Since construction of the railroad along this stretch took place between 1906 and 1909, I doubted that the construction crews were the original discoverers of the cave, although I have always heard that the railroad used the cave for storing food. Both articles describe how pioneers used the alkali flats in front of the cave as a picnic grounds. The men supposedly entered the cave to chip enough ice to make ice cream in the old crank-powered churn. 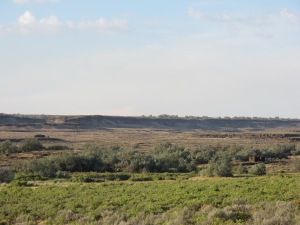 The roofless remains of one of the few surviving pioneer cabins lies across the creek and west of the Ice Cave.

It took another Herald article, dated April 25, 1975, to change my mind about the discovery of the Ice Cave. This one quotes my dad’s old friend Nate Lewis. He was 85 years old when he was interviewed for the article, and he recalled the discovery of the phenomenon. According to Lewis, who worked on the railroad around Othello for his entire career, around 1906 railroad construction workers discovered ice on the ground at the base of the mountain. They excavated a chamber about ten feet into the hillside and installed wooden beams to support the roof. It was this room that came to be called the Ice Cave.

Lewis went on to describe how a local farmer named Chambers operated the cave as a sort of community deep freeze in the 1930s. Meat, milk and butter were stored inside, under lock and key…and Chambers kept the key. During the hard times Chambers sometimes had to post armed guards to ward off rustlers.

Seriously, now: if my dad’s old friend Nate Lewis said that the railroad men created this cave, I have to believe him! Case closed. The Ice Cave was never discovered at all. It was created. The Saddle Mountain Ice Cave was a man-made cellar created by railroad workers in the first decade of the 1900s, exploiting a natural phenomenon that may not be unique in this region.

Although I cannot locate the passage now, I recall reading the journal of an early explorer in the Grand Coulee country who lost track of his guide and wandered about with no idea where to locate water. The potentially deadly situation ended when he discovered buried ice at the base of one of the cliffs, although it was the middle of the summer. In his Big Bend Railroad History blog (link in the sidebar) Dan Bolyard republished an October 9, 1892 New York Times story about a similar spot in Moses Coulee. Perhaps it was the same place. In the Times article, an Indian sells ice to a white man in the heat of the summertime. The perplexed white man follows the Indian’s back trail to see where the ice came from:

“A search disclosed a cold stream trickling through the shellrock, and further up the ice beds were found. They were formed among the masses of shellrock by the melting of snow in winter, the water running down among the rock and freezing at night. Ice remains there perpetually and in large quantities.”

Shellrock in this instance evidently refers to the same type of talus slope the surrounds the Saddle Mountain Ice Cave. Bolyard believes this ice deposit to be located along Palisades Road. If there are two such ice deposits in the region, there might be even more.

Miles of scattered chips, the detritus of tool-making Native Americans, line the course of Crab Creek in this vicinity. According to A. J. Splawn, this was where Chief Moses had his winter camp in the late 1800s. Nonetheless, there is no evidence of the Indians using an Ice Cave on Saddle Mountain.

So the Ice Cave on Saddle Mountain is somewhat less glamorous than some of the stories that have been told about it. In spite of its location adjacent to an extensive surface scatter of flinty rock chips and to the vicinity that pioneer historian A. J. Splawn identified as Chief Moses’s winter camp, the Ice Cave probably was not used by Native Americans. The excavation known as the Ice Cave was a by-product of railroad construction, not a natural cavern. It never went very far into the slope, and today it doesn’t even exist any more. But it has won a place in the legends of the local history of the Lower Crab Creek valley.

19 responses to “Legends of the Ice Cave”