All the Warning We’ll Get 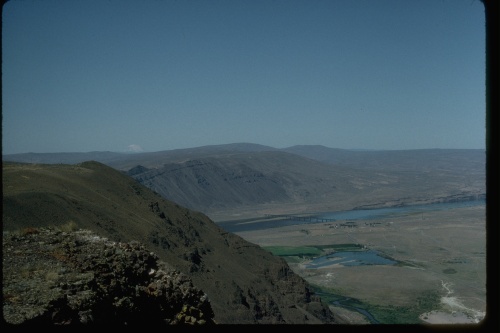 The Saddle Mountain Fault scenario envisions an 87-mile long failure of the fault.

There was a small earthquake centered on Frenchman Hill one day around 1972. When an earthquake scientist from the University of Washington called Othello High School to look for a reliable  student to tend to a helicorder they were setting up at the epicenter, they ended up talking to my mother, the counselor. I was 16, and I had just gotten my driver’s license. She told them she had a perfect match for them.

So my second job off the home place (the first one was changing sprinklers for my neighbor) was visiting a tiny trailer parked next to a plowed field overlooking the Lower Crab Creek valley and the ancient massive slide on the north face of Saddle Mountain. Six seismographs fed streams of data to a series of heated needles that recorded every tremble of the earth around the trailer. I had to changed the waxed paper they burned their message onto once a day and then put in a phone call to Colorado to calibrate the clock with the National Bureau of Standards.

Although I didn’t know it at the time, this must have been a heady period for earthquake scientists in the Northwest. Endorsement of the theory of plate tectonics was in its infancy. Studies of the fractured ocean floor off the coasts of Oregon and Washington were beginning to describe a huge rift in the earth where the North American plate collided with the sea floor. Evidence of ancient earthquakes was turning up.

A hypothetical magnitude 7.35 earthquake strikes the Saddle Mountain fault. This is a screenshot of the DNR scenario. The accompanying report describes the potential effects on the region’s people, property and economy.

Locally, the 1976 earthquake came as a reminder that the Saddle Mountain range was actually an active fault line. This was something the nuclear industry had vigorously denied as WPPSS sought a license to build their new power plant on the Hanford Reservation. After all, the last time the earth shook along this fault line was way back in 1918. My father, who had been only 4 years old at the time, described rocks bounding down the face of the mountain at Corfu.

Now, decades after my brief stint as an earthquake scientist’s slave, intensive studies of all the dangerous fault lines in Washington State have resulted in a collection of scenarios that the Department of Natural Resources has posted to their website. Everyone living in this region needs to look at these studies. I’ll repeat: everyone.

In the Saddle Mountain Fault scenario 2,520 buildings in 10 counties are extensively damaged. A further 832 are totally wrecked. Only 278 people suffer various degrees on injury, but do you want to be one of them? Homes and businesses of 4,382 will have no power, and 1,533 of these will lose access to potable water. Incomes will suffer one and a half million dollars in losses and a further loss of six hundred million dollars of capital stock will occur.

This scenario is one of twelve released by the DNR, and this one is far tamer than most of the others. Included in the collection are quakes centered on Boulder Creek, north of Bellingham, Seattle, Seatac, Tacoma, Olympia, Nisqually, Whidbey Island, the Devil’s Mountain Fault in the Skagit, Chelan, Spokane and Cle Elum. But the grand-daddy of them all, of course, is the Cascadia Fault.

There are two scenarios that study Cascadia Fault failures. One is limited to the northern region. The other envisions the effect of a Magnitude 9 earthquake along the entire 800-mile fault line. For comparison, here is a screenshot of highway and railway bridge damage from this quake.

Bridge failures will limit access to emergency services and relief operations following a Magnitude 9 earthquake on the Cascadia Fault.

Recently I’ve read a pair of books on the subject of this fault. One, by Bonnie Henderson, details the tsunami that will follow a quake on the Cascadia Fault. In The Next Tsunami, Henderson follows the scientific footwork that uncovered the fault and its historical record. The last time a 9.0 quake occurred along this fault was on January 26, 1700. The tsunami that struck Japan the following day was recorded in multiple archives in that country. For a more comprehensive look at the damage following a quake like this, read Full Rip 9.0 by Seattle Times Science writer Sandi Doughton.

The point is made time and time again. In spite of the fact that these are imagined scenarios, the reality is that there will be earthquakes like this. We just don’t know when. What can you do to be prepared?

One response to “All the Warning We’ll Get”