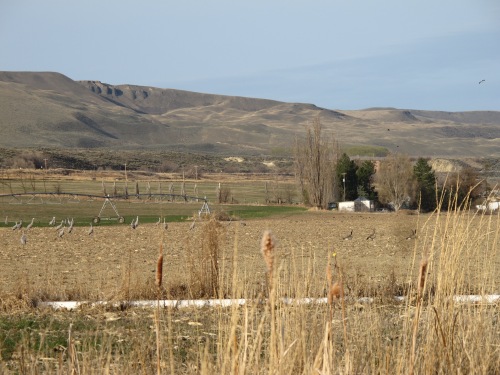 Sandhill cranes frolic in the fields of the Danielson farm, with the Saddle Mountain cliffs looming over it. Photograph by Phyllis Danielson.

The communities of Oso and Darrington were devastated by the recent landslide, in which around fifty houses and more than thirty people were annihilated in the space of a couple of minutes. It will be a long time before life can return to anything like it used to be, with Darrington’s main artery to the rest of the world cut off. Now commuters from Darrington have to head north, past our Sauk River cabin, to get to their jobs, shops and supplies. It takes a lot of time and gas. My son’s scout troop raised cash and supplies that we took to Darrington last weekend, and I’ve been watching the news about the landslide daily.

Pictures of the Oso landslide reminded me very much of the landslide my family and I used to climb around on when I was a kid. One of our favorite hikes was to the cliffs at the top of Saddle Mountain, where you can climb down to a ledge where sandstone exposures have been carved by the winds and graffito-ed by generations of local visitors. END_OF_DOCUMENT_TOKEN_TO_BE_REPLACED

When I considered doing this article I had a flashback to doing book reports in what we called Junior High, when I was a teenager. I remember in particular the seventh-grade English teacher with a mangled middle finger who started off the year telling each class his chilling tale. It seems that Mr. B had a terrible problem with anger. He carried sixteen penny nails with him to chew on when he got really upset, which was his anger management technique…it kept him from physically destroying the human object of his anger. Evidently, a student made him angry one day when he had run out of nails. To avoid bloody homicide, Mr. B claims, he shoved his own finger into his teeth. It left him with this mangled finger that he used every year to convince his students to treat him nicely.

So, on with the book report. Mr. B would want me to compare and contrast these books on a similar theme. The books I recently finished reading are two that deal with ways in which humankind deals with natural disasters and the natural rhythms of our world. In the order in which I read them, the first is Cascadia’s Fault, by Canadian journalist Jerry Thompson, and the second, Brian Fagan’s The Long Summer. What links the two books in my mind must be their common theme of the role that forces of nature play in determining human history. END_OF_DOCUMENT_TOKEN_TO_BE_REPLACED