Tag Archives: Parting of the Waters

The Parting of the Waters 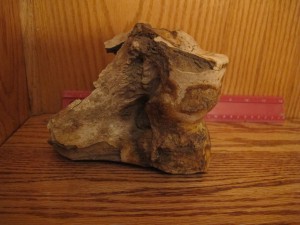 The shattered remains of a bison leg bone, found in a bulldozer tailing near the Milwaukee tracks at Taunton. Fossil animal remains from this area are typically severely broken and disjointed.

Recently I acquired Bruce Bjornstad’s guidebook to the Ice Age Floods of Eastern Washington, On the Trail of the Ice Age Floods (Keokee Books, 2006). In fact I’ve been carrying it around in my briefcase and using it to fill in odd moments when I’m waiting for my son to finish his Jazz Band practice or to get out of school. It’s about time an interpretive tour guide like this was published! Because of the immensity of the subject, this book is a field guide only to a truncated rectangle of curious flood features in the Mid-Columbia Basin. But it is rich in detail and information. This year, Bjornstad published a second volume focusing on the northern landscapes where the flood began through the Mid-Columbia. He presumably plans to follow the water through to its eventual mixing with the sea.

An amateur only (have I ever made that completely clear?), I was excited to see that scientists had actually taken time to study the area I’ve been writing about. That gigantic landslide I mentioned in my post The Five Mile Slide actually has a name, quite logically the Corfu Slide…although it stretches from Taunton on the east to Corfu on the west. Bjornstad’s book spends a couple of chapters explaining the mechanisms that allowed the flood to create such a variety of unusual landscapes. The hummocky surface of this landslide had always seemed mysterious to me, but his book details precisely how the original topography slumped away in successive wedges. The feature I refer to as Column Crevice in my post To the Cliffs and Beyond appears to be one of the cracks in the earth where a landslide was developing, left exposed at the end of the flood, a landslide frozen in time. In fact a hike across this landscape would reveal successive events in the process of the collapse of the northern slope of Saddle Mountain.

And I was touched to see that Bjornstad refers to what locals around Othello refer to as The Bench has been named Parting of the Waters. END_OF_DOCUMENT_TOKEN_TO_BE_REPLACED